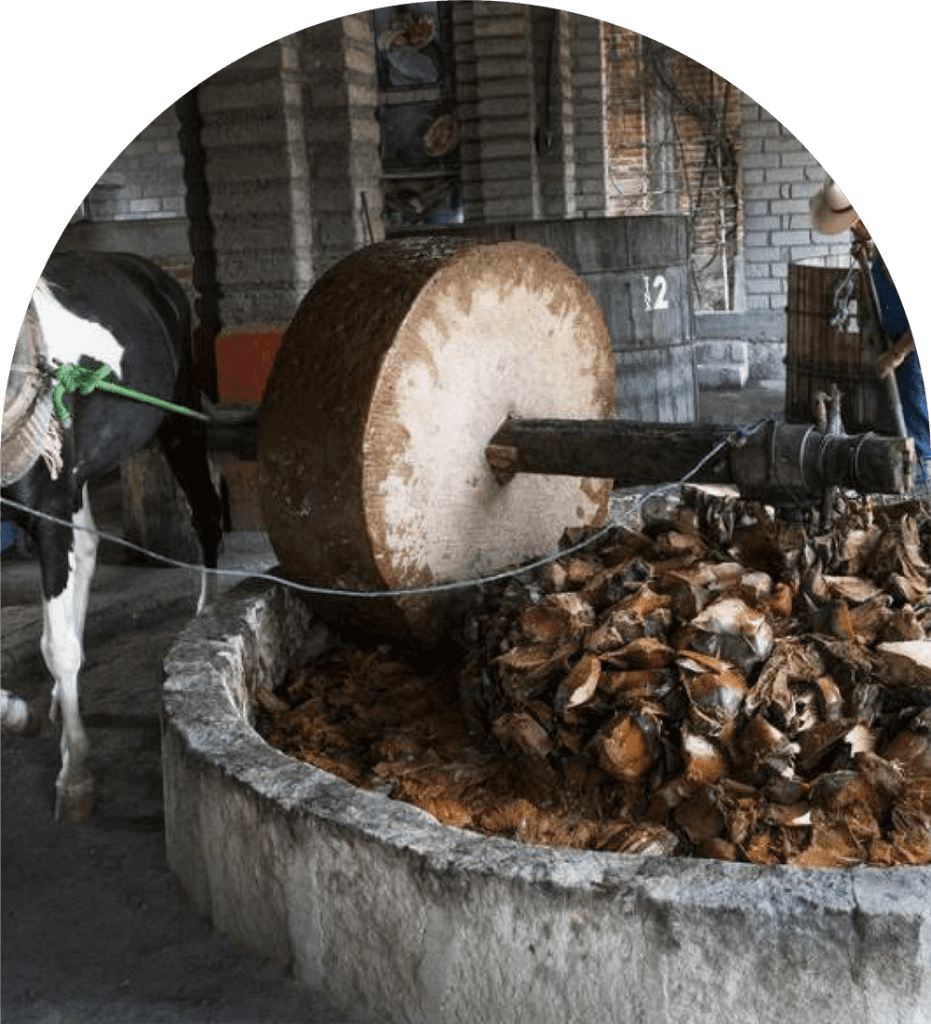 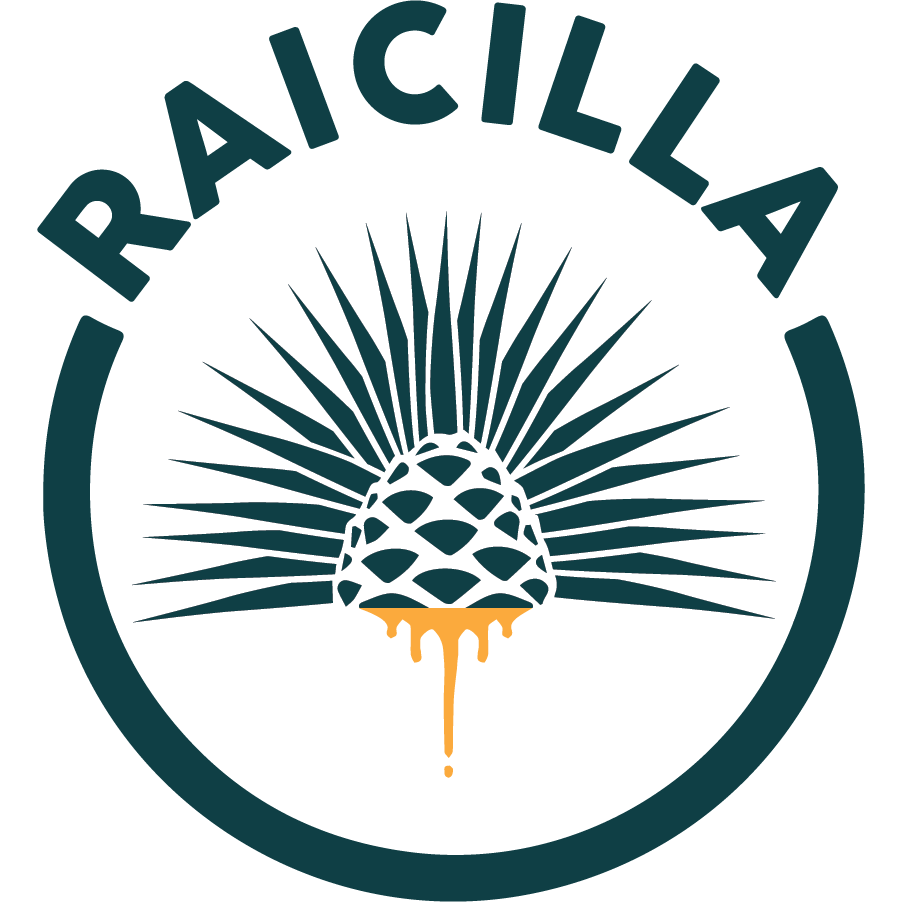 The History of Raicilla

Despite its centuries-old history, for many, Raicilla remains shrouded in mystery. In part, this is because of diversity within the category.

Despite its centuries-old history, for many, Raicilla remains shrouded in mystery. In part, this is because of diversity within the category. Also, some producers are making the beverage literally underground. It has been this way since its production was banned by the Spanish hundreds of years ago.

Like tequila and mezcal, Raicilla is made from the agave plant. It is roasted like mezcal, not steamed like tequila. It hails from Jalisco, which lies outside the states in which official mezcal must be produced. As with Champagne in France, Mexico has a national system to classify locally made booze, called a Denomination of Origin. Agave spirits made outside these recognised regions, are not part of the party and are commonly known as Agave Distillates.

Most Mezcals are double-distilled, Raicilla is typically single-distilled but many double distil for a broader appeal and balance. Because Jalisco has the second-greatest biodiversity of agaves outside of Oaxaca, distillers use a range of plants in its production, such as Maximilliana, Americana, pata de mule, or mule’s foot (which is like an Espadin).

The epicentre of Raicilla are on the west coast, south of Puerto Vallarta (“de la costa”), and in the Occidental Mountains (“de la sierras”). Some distillers use copper pots, which they call Asian stills, modelled after the copper vessels Filipino immigrants introduced to coastal Jalisco, which they used to distil coconuts. The spirit itself is ancient but has a delightfully insurgent postcolonial Spanish departed.

Once a humble beverage, primarily enjoyed by farmers, Raicilla was rendered illegal and taxed heavily after the Spanish conquest hence production moved underground, similar to the moonshine era.

When tax collectors came to small villages, locals lied, saying the spirit they were making did not use the piña of agave like mezcal, rather claiming it was from the “roots” of the agave. Which was all untrue. They gave their spirit the name Raicilla, or “little root.” Even today, some producers make their Raicilla underground and sell it by the roadside in Jalisco in unmarked plastic bottles. 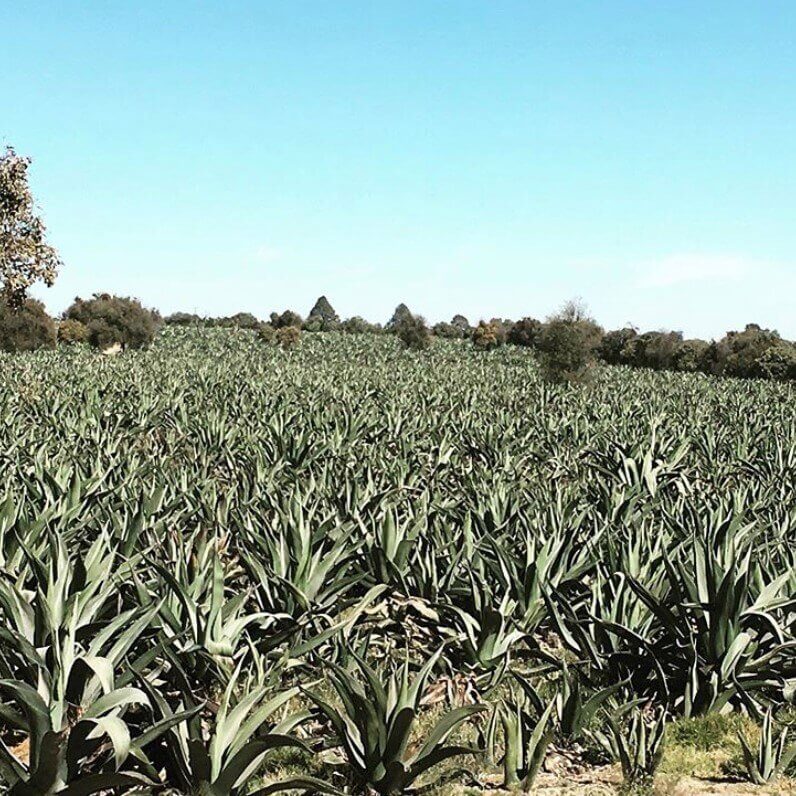 Agave maximiliana fields used in the making of Estancia Raicilla. 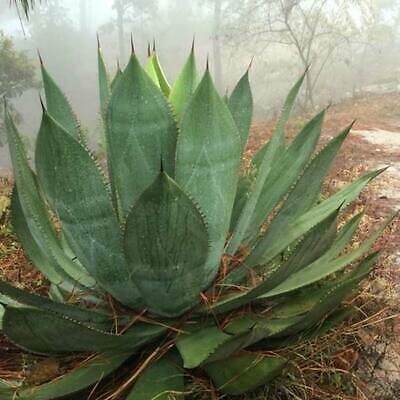 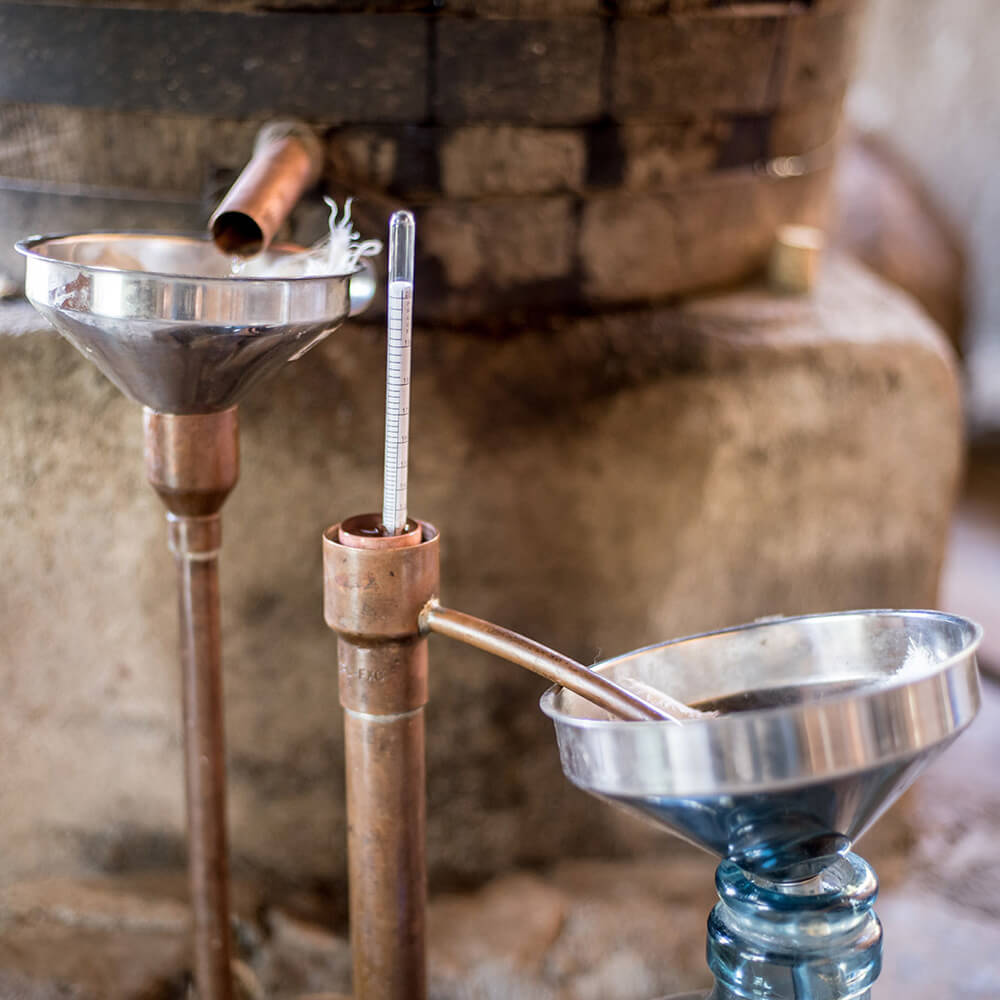 Raicilla is protected via “Denomination of Origin”

Raicilla is the sixth Mexican spirit that in June 2019 received Denomination of Origin only after Tequila, Mezcal, Sotol, Bacanora, and Charanda. So, what is Raicilla?

It is the beverage obtained from the distillation of fermented juices extracted from ripe heads of the agaves Maximiliana, Koch, Valenciana, Angustifolia Haw and Rhodacantha. To meet the requirements of DO Raicilla must be cooked, charred and harvested in the territory included by the designation of origin of the same name.

In a generic way, it is possible to differentiate two big typologies, distinguished by geographic region and the raw materials used for its manufacture. They are the “Raicilla de la Costa,” made with agaves angustifolia Haw and Rhodacantha, and the “Raicilla de la Sierra,” made of agaves Maximiliana, Koch and Valenciana.

As in many other expressions of the agave, the final scents and flavours of the Raicilla are deeply linked to the origin of their raw materials. The terroir and its ingredients and minerals distinguish each Raicilla. 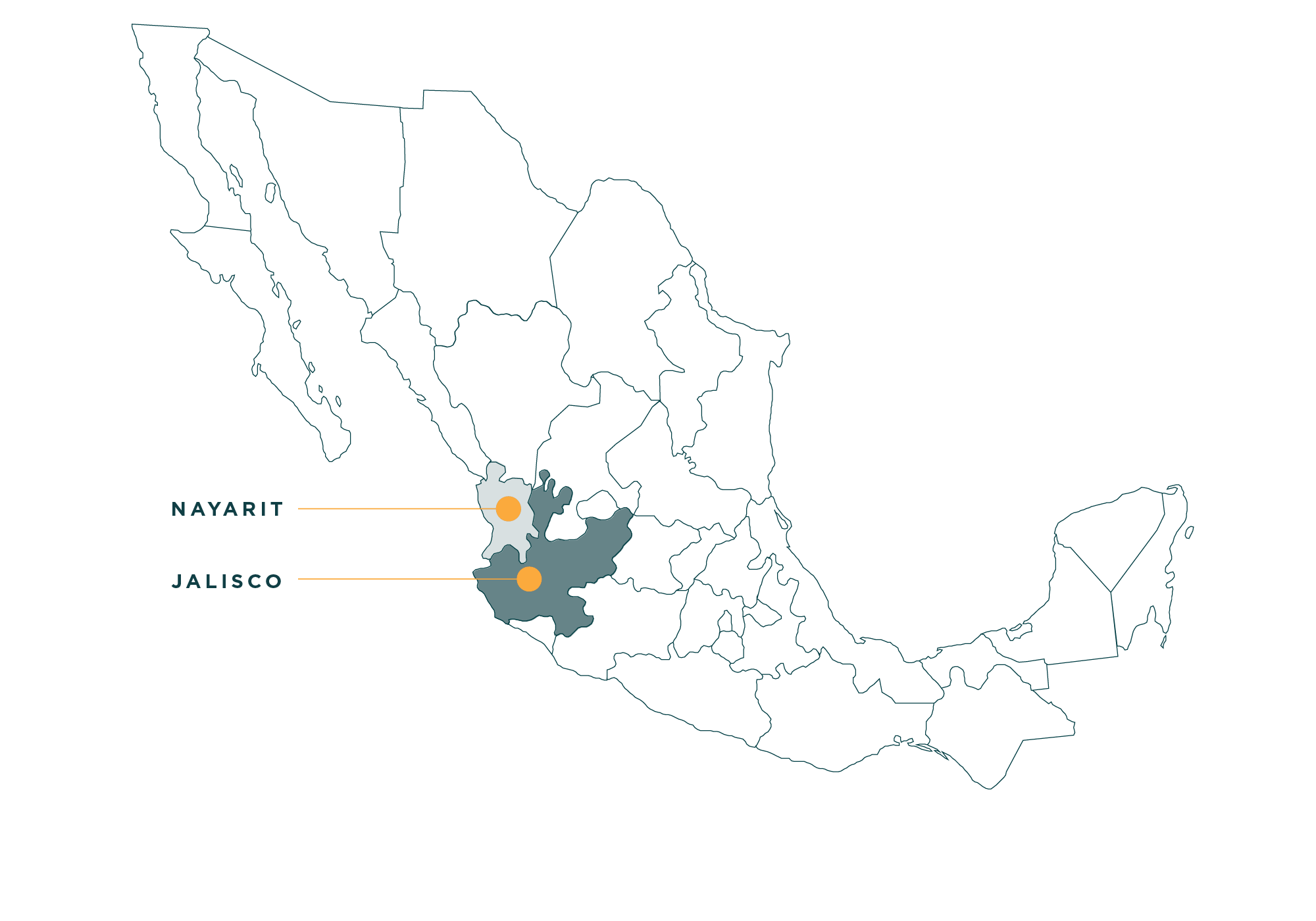 How Raicilla is made

Although mezcal, tequila and Raicilla all start in the same place, with the agave fruit in the ground. Each category uses slightly different cooking processes to distinguish them apart. Agave used for mezcal is predominantly cooked in a pit oven, a big hole in the ground, lined with volcanic rocks and heated by fire at the bottom, into which agaves are loaded before being covered in dirt and leaves.

This subterranean cooking process is what gives the spirit its smoky flavour profile. Raicilla is produced in a similar way to how tequila was produced hundreds of years ago. Agave used for Tequila production is cooked in a flameless pressure cooker (called an autoclave or horno.

The cooker used for Raicilla more closely resembles an above-ground pizza oven (see picture of Estancia Raicilla’s “Pizza Oven”), which combines elements of both tequila and mezcal production. The “pizza oven” is heated to around 750 degrees with oak wood for over eight hours.

The raw agaves are loaded in rapidly into the fire so not to let the heat escape and then sealed. The “pizza oven” more commonly known in Mexico as an adobo oven acts like a pressure cooker. The wood and coal used to maintain the temperature give the agaves a roasted characteristic. You get some of the steam – like in tequila – and some of the smoky characteristics of mezcal, but not as much.

The high-altitude agave of the Mountains on the Sierra Madre Occidental is about 6500 feet above the sea level, so long warm days and cool nights chilled by the sea breeze allow sugars to develop in the agave which are very noticeable on the nose and the palate. Botanical elements, similar to gin are the finish.

The resulting spirit is somewhere between tequila and mezcal – there is a clear smokiness, but it’s more subtle than in mezcal and smoother to drink than tequila. Raicilla boasts a real complexity and sweat flavour versatile for the use in cocktails as much as a straight sipper to be enjoyed.

The yeasts employed during the fermentation, the alcoholic content, and even the know-how of the Master Raicilla makers all add to the lure. Thus, the sensory nuances go from the sweet cooked agave with velvety texture, to the intense smoked with strong tones of citrus, coconut and nuts. “Raicilla de la Costa” has more dominant smoked nuances, resulting from its cooking method in stone ovens. Raicilla de la “Sierra” has much more of a subdued smoke but higher fruit and floral notes unlocked by the sun and higher altitude.

This allows stronger agave sugars from the days heat and nights cool breezes to give Raicilla de la Sierra a sweeter profile driven from the higher sugar content. Just like Tequila and Mezcal, Raicilla can be classified as “Raicilla,” “Artisanal Raicilla,” and “Ancestral Raicilla” depending on the tools and techniques used for its elaboration.

After the distillation, it can also be matured in glass or it can go through the influence of wood to adopt all kinds of chromatic, aromatic, and gustatory nuances. This high-quality spirit made to local tradition, has a complex and colourful cocktail of pineapple, hibiscus, myrtle, and other tropical fruits that are prominent flavours of Raicilla. 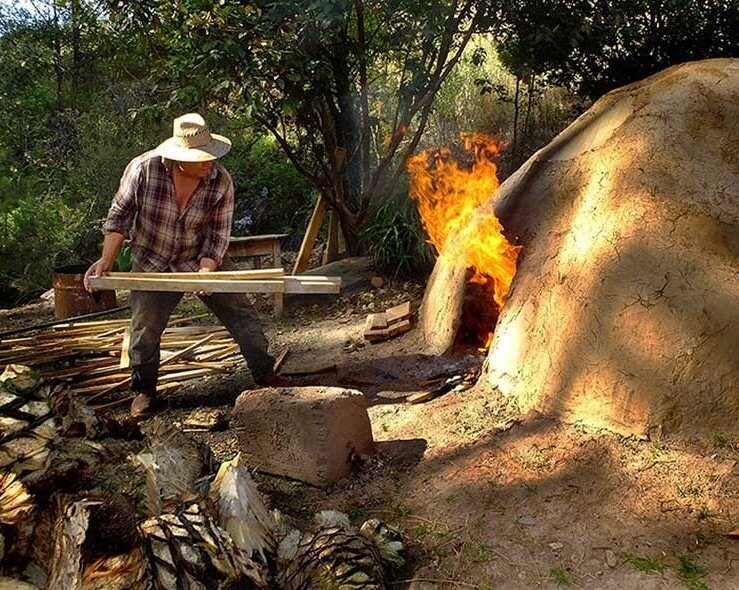 Heating the above ground ‘Pizza Oven” oven used to cook the Maximiliana agaves. 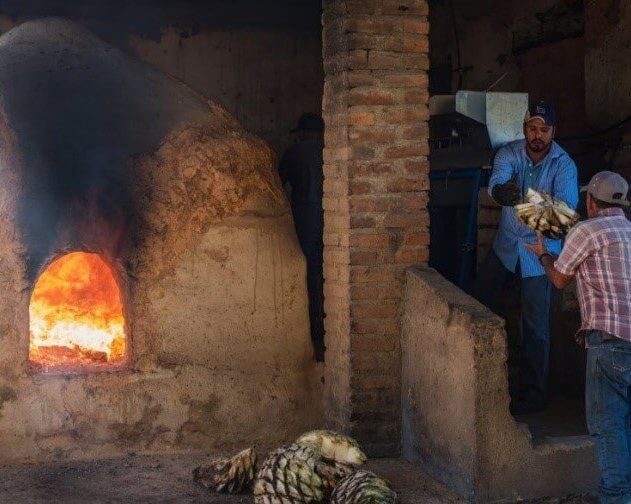 Estancia Raicilla’s above ground ‘Pizza Oven” oven about to be loaded with raw agave for cooking. 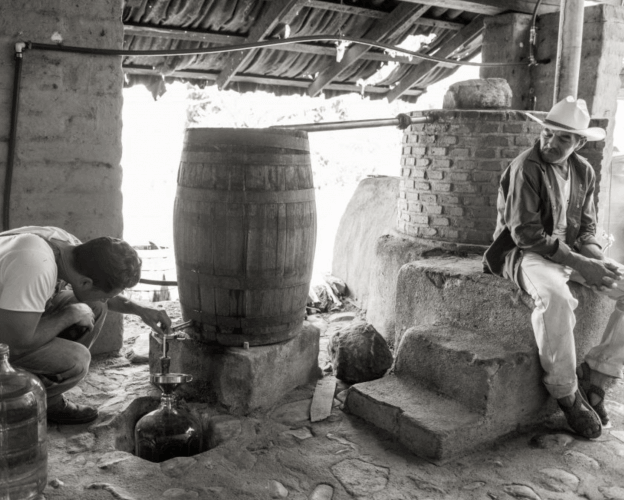 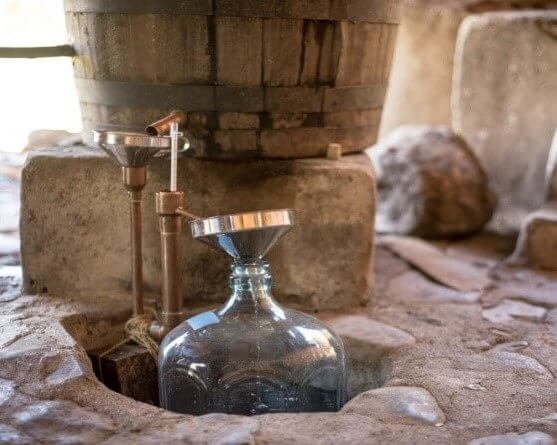 Estancia Raicilla sees no plastic through the process. Straight from still to glass.